AT&T Collaborate – Enhanced Mobile is a Fixed Mobile Convergence solution that provides business, desk phone features on mobile phones. Improve mobile communications with your customers and collaborators by providing your high-definition voice business smartphone users the tools they need when connected to the AT&T VoLTE network.

Back to product page

Invite guests to a workspace with AT&T Collaborate

Assign a task in AT&T Collaborate

Edit a note, task, or file in AT&T Collaborate

Collaborate is a Voice over IP (VoIP) system that transports calls over the AT&T IP network rather than over the traditional public switched telephone network. You can use Collaborate exactly as you use a traditional phone system.

For more detailed information about using your phone, see the Polycom VVX Business Media Phones User Guide, available from Polycom. Note that not all Polycom features are available with Collaborate.

For reference, print this page and fill in the important information your administrator provides.

The VVX 400-series phones have 3 screens (Home, Calls, and Lines) that appear in the phone’s display window.

To display these screens, during a call, press the Home button.

Use these buttons and keys with Collaborate. 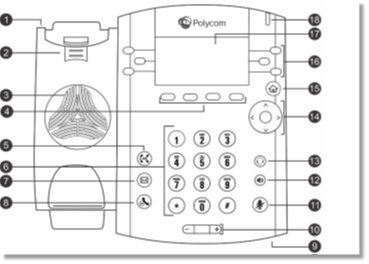 With Collaborate, you don’t need to use an out of network prefix (such as 9) when making calls. The VVX 400-series phones can manage a maximum of 24 calls at a time. You can have 1 active call in progress, with numerous other incoming calls or calls on hold on all lines.

How to make calls

The special features of Collaborate described below can save you time.

With some features, you press buttons or soft keys. With others, you enter special feature codes (for example, *67) from the phone’s keypad. In some cases, you can access features in multiple ways. For more information about feature codes, see Feature access codes.

Manage calls with these special calling features from Collaborate.